Translation errors on public display are always a joy… 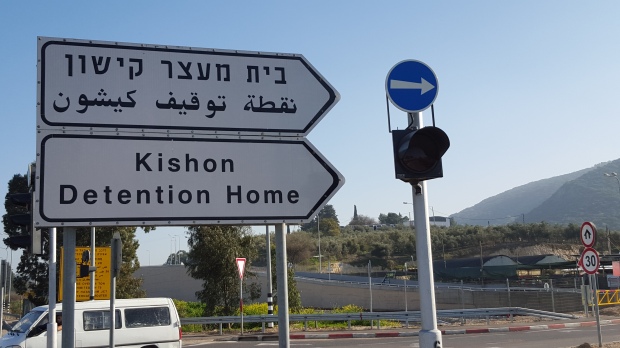 It bears more meaning when it is connected to a place so full of memories and associations like the Jelemeh (“Kishon”) detention center – where political activists from Haifa and all the north of Palestine are used to spend nights after lively demonstrations. Not to mention the Shabak interrogation center that is hidden in the same complex, and is well known for its abuse and torture of detainees from all over the country.

Now, as they work on the new railway from Haifa to Bisan (“Beit She’an”, after ethnic cleansing and Judification), which will soon trade again on the legendary route from Haifa that used to go to Der’aa in Syria to join the Hijaz railway from Damascus to Mecca, they also renovated the entrance junction to the infamous detention center.

So they added this new bold road sign in three languages.

Reading the sign at first, it hit a sentimental cord. I sometimes felt as if Jelemeh was my second home – I didn’t really spend so much time there, but it is the only place in Haifa where, if I happen to be there, I will not go to sleep at home at the end of the night.

Thinking more about it, you tend to blame the low level of the Israeli educational system. Even if you finish “book home” (Beit Sefer, “school” in Hebrew) – you don’t really learn anything except for the Bible and Zionist propaganda.

Some deeper analysis led to the conclusion that the problem lies with Google Translate. Sure the sign’s contractor simply put the words in Google and got it out to print…

But checking with Google proves that it is not so dumb… it just must know the full context to set it right… So it is the Human Factor after all.

The Arabic text is not less weired. I don’t speak about the names of places, as the name of the Arabic village that used to be there, Jelemeh, was replaced by the Hebrew “Kishon”, after the river that passes nearby. The “detention center” became نقطة – “Nuktat Tawkif” – sort of “detention point”. Even Google couldn’t explain this. But “Nukta” (نكتة) in Arabic is also “a joke” – which the detention center is not – but its sign surely is.

In October 2019, Heba Al-Labadi was on hunger strike against her administrative detention, so we gathered repeatedly near the Jelemeh detention center, where she was held, to express our solidarity.

In the meantime, the road was completely transformed and the old lousy sign was removed… to be replaced by new lousy road signs with the same foolish translation!